My nit-picking complaints about iTunes 12.7 (see here and here) have led me to start experimenting with Swinsian (on my Mac) and MediaMonkey (on my PC). I’ll get to MediaMonkey in a later post, but I thought I’d write up some notes on Swinsian.

As you can see in the screenshots below, Swinsian does fix my current gripe with iTunes: the browser at the top of the window shows a perfectly reasonable number of rows, by default (vs. iTunes: 3 rows). That browser is also very customizable in Swinsian: you can have between 1 and 3 columns, and you have several options as to what you display in them. The screenshot below shows two columns, for artist and album. You can easily change that to show genre, artist, and album, similar to iTunes.

Another thing I appreciate is that Swinsian has a “large text” option. The default text size was a little too small for my tired old eyes, so I turned that on right away.

Pulling in my music from iTunes to Swinsian was easy. It imported everything, including play counts and playlists. There are a few ways you can set things up, but (for now) I’m leaving my music in the iTunes library and folder structure, and letting Swinsian re-scan the library on startup. This allows me to add music in iTunes, which should then show up in Swinsian the next time I start it up. That arrangement probably makes the most sense for someone like me, since I still want to be able to sync music to my phone from iTunes. (Swinsian can sync to older iPods, but not to iOS devices.)

I only have a few issues with Swinsian, and they’re mostly related to the necessity to keep iTunes going. (If I could abandon iTunes and let Swinsian manage all my music, things would be smoother.) Probably the biggest one right now is that Swinsian doesn’t really distinguish audiobooks as a separate category, the way iTunes does. So all of my audiobooks are intermixed with my music. I’m not sure how to get around that one, or if it’s really that big a deal. If I was fully committing to Swinsian, I’d just leave the audiobooks in iTunes and move the music to Swinsian, and everything would be fine.

I’m also not sure that I like the way it handles “album artists” vs “artists”. It’s got some flexibility on that, but it’s not completely consistent. You can see the issue on the McCartney box set shown in the screenshots below. In iTunes, the track list correctly shows the track artist (sometimes McCartney, sometimes Wings), while in Swinsian, it’s always showing the album artist in the track list (though it does show the correct artist in the detail pane on the right). That’s not really a big deal, but it would be nice if they fixed that.

Going back to my gripe about the top browser view in iTunes, I found a discussion thread related to it on the Apple site today. It kind of sounds like they might recognize it as a bug and fix it in the next release. Here’s hoping! 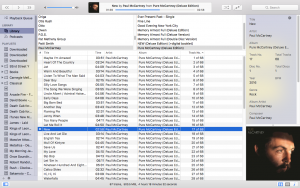