I just realized today that I’ve recently hit the five-year mark since I decided to start losing weight. Here’s a blog post from five years ago today where I discuss my initial progress. (I didn’t mention my starting weight in that post, but it was 230 pounds.)

I’m still tracking all of my meals with Lose It, and I still subscribe to their premium version. I’m including a graph of my weight over the last five years here. So far this year, I’ve basically maintained my weight at 135 (+/- 2 pounds). I’m pretty comfortable at this weight, so that’s fine. (Though I’d kind of like to get down to 130, just so that I can say I lost an even 100 pounds. But that’s probably not a good idea.)

The green line on the graph is from the last time I set an actual goal weight in Lose It: 160 pounds. Once I hit that weight, I stopped actively trying to lose weight, and just kind of let things go until I bottomed out at a stable weight, which, for me, is apparently 135. I’m sticking with a goal of about 2100 calories per day, and I’m usually right around there (+/- 200).

I’ve also done well on the exercise front, at least in terms of step count. I almost always hit at least 7500 steps a day and often go over 10,000. I never really did adopt any other exercise habits though. I never joined a gym or anything like that.

I don’t really have any profound weight loss insights to share here. If you’re looking to lose weight, different things are going to work for different people. For me, I think this is the stuff that was key: 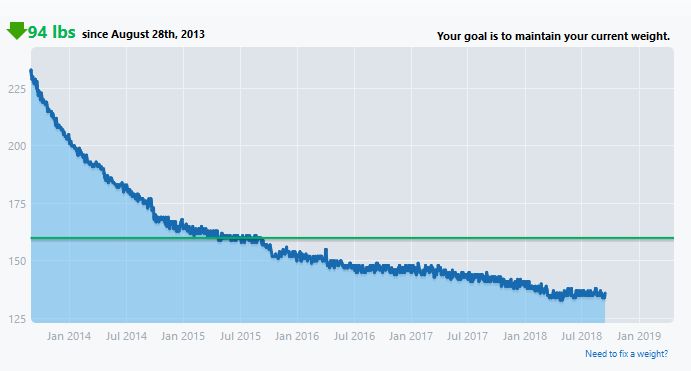 I haven’t been to the Carnegie Deli in quite some time, but I’ll sure miss it. I wanted to go back one more time before they closed, but I never got around to it. Here’s a letter to the Times from the owner of Katz’s. (Speaking of which, I’m not sure I’ve ever been to Katz’s. I should fix that.) And here’s some last photos from the Carnegie from Gothamist. My current calorie budget doesn’t really allow for frequent pastrami sandwiches and cheesecake, but once in a while, I can make an exception.

There’s a new cafe/bakery in Somerville, across the street from my apartment. It’s in a storefront that’s been vacant for a few years, and had previously been used for a succession of three or four bagel shops. These were all traditional NJ bagel shops, and all of them were pretty good. Since the last one closed, there really hasn’t been a good place in Somerville to get a fresh bagel. (This may have actually helped quite a bit with my weight loss over the last few years.) Dunkin Donuts and Starbucks have bagels, of course, but they’re not really bagels, if you know what I mean.

I’ve been to the new place once, and had a sandwich and cappuccino. They were both OK, but not amazing or anything. I need to try their bagels and see if they’re any good.

There are now three places in town that could reasonably be described as “coffee shops”: Starbucks, Dragonfly, and Conlin’s (the new place). There was an interesting article in The Guardian recently about how coffee shops have become a signifier of urban change. Something does seem to be happening to Somerville, with new, expensive, apartment buildings going up, and fancier stores on Main Street. I guess I can’t complain about any change that allows me access to better coffee. But I hope my rent remains affordable.

I decided recently that I really need to lose some weight. So I started using Lose It about two weeks ago, to track my calories. I also bought (and read) their book

. I’m not sure if my scale is accurate enough to say whether or not I’ve really lost any weight yet, but, if it is, then I’ve lost a couple of pounds. My goal is one pound a week, until I’ve lost 30 pounds, so, if that works, I should hit my goal in mid-March 2014. Assuming that Lose It is giving me correct numbers about my calorie budget, then I don’t think I’ll have a huge problem sticking with the program. I’ve stayed within my calorie budget every day so far, though I’ve had to make some guesses about calories recently, so I don’t know if I’ve *really* stayed within the budget.

The last several days have been a bit rough.  I went out to dinner with a friend on Wednesday, and had a meatball parm sandwich, which was definitely a bad idea. Then, we had a department lunch on Thursday at an Italian restaurant. We had three entree choices, and I ordered the one that seemed likely to have the fewest calories, but it probably still had more calories than I wanted. Then, on Friday, we had a department barbeque, which I just skipped out on. But another friend wanted to go out for dinner Friday night, so I did that, and had a small steak. Saturday was fine; I only ate good stuff that I knew the calorie count on. But today, I went downhill a bit again, since I went out to brunch with my brother (banana pancakes), then picked up a couple of empanadas at the Somerville Jazz Festival this afternoon. (They were from a restaurant here on Main St that makes *great* empanadas!) If I guessed right on calorie counts, then I’m still within my budget. But who knows, really?

I should be able to do reasonably well in this coming week. We’ve got no work events that should cause me to deviate from eating relatively low-calorie lunches. I don’t have any particular plans for going out to dinner, but I probably will once or twice. I’ll just have to be careful.

On the exercise front, I’m just trying to get in a lot of walking. The weather has been pretty good, so it hasn’t been a problem to do a fair amount of walking. I’m worried about keeping that up once it gets cold out though. I’ve been looking around at cheap treadmills that would fit in my apartment, or a local gym that’s got treadmills. (We have a gym at work, but I’m not that enthusiastic about it, for several reasons.) The treadmill thing is actually turning into a challenge. I haven’t found a local store that actually carries manual treadmills, which is what I’d need to buy if I want a reasonably-priced, compact, folding, model. I can just order one from Amazon, but I’d really like to check one out first. And, on the gym front, there’s a new fitness place opening on Main St, but they only have exercise bikes, no treadmills. I also tried the local YMCA, but I had trouble finding anyone to talk to there, so I have no idea if they have treadmills or not. I may have to try calling them during the week.

I don’t want to turn my blog into a diet and fitness blog, but I thought there would be some value in writing this up, for future reference. If I meet my goal in March, then I can look back and see where I started. And, if I don’t, maybe I can look back and figure out what I did wrong!

A friend gave me some zucchini from his garden, so I’ve decided to try making some ratatouille. I’ve never even eaten ratatouille, never mind cooked it, but it seems like something I should try. There are quite a few recipes out there on the internet: the weird one from the Pixar film, an interesting, but time-consuming, one here, one with mushrooms over here, and what I’m guessing is a tradional French version here. I think I’m going to go with something that’s kind of a combination of recipes from two cookbooks I’ve got here at home.

Beeramisu: Basically, tiramisu with beer in it. Maybe not as bad an idea as I’d originally thought.

I took a shot at making risotto tonight. It turned out OK, but not great. The rice wasn’t quite the right consistency, but it tasted good. I’m not sure if I screwed something up, or if the rice I was using just wasn’t good. Either way, I’m definitely going to try again at some point.
I basically made up my own recipe, using this random recipe and this Alton Brown recipe as a basis, along with this very useful page of general information. I saw the Good Eats episode on risotto quite some time ago, and I’ve been meaning to try it since then.
Just for future reference, I used mushrooms, asparagus, vegetable stock, Pinot Grigio, and fontina cheese, along with the other obvious ingredients (rice, onion, etc).

Yes, there really is a cheese called Stinking Bishop. And, of course, after the Wallace & Gromit movie, I (and probably many other W&G fans) would love to try it, even if it does “smell of old socks”, as the description states.

Some interesting facts about Orange Roughy. It’s been a while since I’ve seen any in the supermarket, though I haven’t really been looking.