I found myself in the mood for anime again recently, so I picked something out of my anime DVD pile and started watching. I started with Full Metal Panic? Fumoffu, about a week ago. I finished that up yesterday, and started into Full Metal Panic!: The Second Raid. I’d watched the original Full Metal Panic series quite some time ago, and liked it enough to buy Fumoffu and TSR, but then never got around to watching them. I’m not sure when I bought Fumoffu, but I know I bought the first TSR DVD in 2008, since I left the receipt in the DVD case.

After watching a bit of Fumoffu, I took a look at the Wikipedia page for it, and realized that it was produced by Kyoto Animation, the studio where that arson attack happened last month. From the Wikipedia page, it appears that Fumoffu might have actually been the very first series they produced.

I wasn’t really familiar with Kyoto Animation, prior to reading about the arson. It looks like they’d been around since the 80s, but only started acting as the “main producer” on stuff in 2003. Reading up on them, it sounds like they’re a pretty cool company, which only makes the arson thing all the more heartbreaking.

Both Fumoffu and TSR were directed by Yasuhiro Takemoto, who died in that attack. The first DVD of the TSR series has a couple of special features on it, showing a few of the creators of the series, including Takemoto, doing some background research for it, going to a demonstration of the Japanese Self-Defense Forces, and on a trip to Hong Kong. Those were fun to watch, but now that I know what happened to Takemoto, I’m feeling pretty melancholy about it.

I started out watching this stuff purely as goofy escapism, but now it all seems a lot heavier. I’m still going to finish watching TSR, and I’m sure it’ll still make me laugh, but lately it doesn’t seem like I can enjoy anything as pure escapism anymore. The real world always intrudes somehow.

As an aside, Fumoffu and TSR are both available to watch for free on YouTube, as is the first series. These appear to be legitimately posted by Funimation. I’m not sure why they’re available for free. Maybe they put older stuff on YouTube to get people interested enough to pay for newer stuff? Regardless, it’s cool that you can watch this stuff for free if you want to.

Over the last couple of months, I’ve been working my way through a few old manga series that I started reading about ten years ago, but abandoned at some point. This all started with Rurouni Kenshin, back in November. I finished that series right around Christmas, with volume 28. (I’d previously read 1-19.) After that, I picked up on Ai Yori Aoshi. I’d read the first 13 volumes of that more than ten years ago, and finished the last few (14-17) in the week between Christmas and New Year’s. Then, I picked up a short 10-volume series called Remote. I’d previously read the first six volumes. Right around New Year, I reread all of those, and then continued through the last four.

So that knocks a few things off my list. I had a lot of fun reading these. I have a few other series sitting around that I’ve either started and abandoned or bought but never started. So I’m thinking about continuing (or starting) those too.

One of the oldest and longest-running series on my list is Oh My Goddess. There are 48 volumes for that one, published in the US by Dark Horse, from 2002 through 2015. I have about half of the volumes between 1 and 20. I picked them up out of discount bins at a couple of conventions, a long time ago, so I was picking up what was available, figuring that maybe I’d fill in the holes at some point. I’ve read three of them. I guess I could just start reading what I have and see if I want to pick up the rest. Forty-eight volumes is a lot though. From what I can remember, it was the kind of series where it’s OK to dip in and out. I don’t think it was one long story. And I remember it being pretty funny.

I also have a fairly random sampling of Battle Royale volumes. That’s a 15 volume series; I have six of them. Again, they all came out of a discount bin at a con long ago. This one, I think, really is one long story, so I’m not sure if just reading six random volumes out of 15 is going to be any good. The series was originally published by Tokyopop before their shutdown, and is currently out of print in the US (as far as I can tell), though it’s not hard to find used copies on Amazon for less than their original cover price. Tokyopop made the interesting choice to bring in Keith Giffen to do an English “adaptation” of this series, so it’s not just a straight translation. I’ve seen mixed opinions on this, but it seems like most fans would have preferred a more direct translation.

There’s one more short series I have part of: Planetes. This was originally published as a five-volume series. I have the first three. (Technically, it was a four-volume series, but the fourth volume was split into two in the US.) The original publisher was Tokyopop; it was re-released by Dark Horse not too long ago, in two large omnibus volumes. I could probably get what I’m missing by picking up the second Dark Horse omnibus. I’ve been really curious about this series, since it’s generally gotten very good reviews. It’s supposed to be a hard SF series, which would be unusual for manga. (Most manga SF falls into the over-the-top space opera sub-genre.)

This has all got me thinking about the long and checkered history of manga publishing in America. I found a good article about this history on Anime News Network. Most of the manga I mentioned above was bought during the big manga boom of the early 2000’s, around 2000-2005. But I remember buying some of earlier stuff that came out of Eclipse/Viz in the late 80s, along with Lone Wolf and Cub from First, and Akira from Marvel.

Speaking of Lone Wolf and Cub, I should really pick up the Dark Horse collections of that, published from 2000-2003. They printed the whole series, whereas First only got through about a third of it. And the Dark Horse volumes are available digitally, so I don’t have to worry about even more manga paperbacks cluttering up my apartment. But maybe I should wait to buy those until after I’ve gotten through the rest of the stuff I already own.

I finally got around to watching Shin Godzilla today. It’s a weird film, but it’s definitely worth watching. I started hearing interesting stuff about it last year, including good reviews from RogerEbert.com and Ars Technica.

It’s not a movie that I think mainstream American audiences would ever enjoy or understand. There are a lot of scenes of politicians and/or scientists sitting around conference room tables, talking. These scenes are well-done, and not at all boring, if you can keep up with the subtitles. (They’re talking really fast, so you do have to pay attention to keep up.)

The CGI effects are good, but not quite up to typical modern “Hollywood blockbuster” standards. Godzilla’s initial form is pretty weird-looking, but the creature evolves into something more closely resembling the typical Godzilla fairly quickly. Overall, I found the “Godzilla destroying Japan” scenes to be well-done and engaging (though occasionally funnier than they were probably supposed to be).

There’s a lot of stuff in the movie related to Japanese politics, particularly post-Fukushima. A lot of the political stuff reminds me of a manga I read years ago, the name of which I can’t remember right now. At any rate, it’s a lot more ambitious thematically than a typical monster movie.

I bought the movie on Blu-ray; I could really have gotten away with just renting it though. I may watch it again at some point, but really seeing it once was enough for me.

Since I need to post something for Kurosawa’s birthday, in any year when I remember it (or I’m reminded about it):

I went to the Met on Sunday, mostly just because it was a rainy day, and I didn’t want to just sit around in my apartment all day. They’re running an exhibit right now called “A Sensitivity to the Seasons: Summer and Autumn in Japanese Art.” Most of the items in the exhibit were, I think, things I’d seen before. They displayed a number of prints from “One Hundred Famous Views of Edo,” including Sudden Shower on the Great Bridge. I know I’d seen this print, and others from the series, before, but something struck me about it right then, maybe having something to do with the rainy weather outside. I’ve always liked Japanese prints like these, but I never really bothered to learn much about them.

On my way out of the museum, I found this book, marked down to $16, so I picked up a copy. It’s a huge book, with great reproductions of all the prints in the series, and a fair bit of background information. The book was apparently related to an exhibit at the Brooklyn Museum some time ago, where they have a full set of prints. Their site has a nice interface for browsing the prints, by season, or by keyword, so you can view, for instance, all the prints with rain or snow in them.

On the way home from the museum, it occurred to me that this series would also make for a pretty cool iPad application. Well, someone else had that idea too: Hiroshige HD is an iOS app containing the Edo series, and several others. It’s only 99 cents right now. There’s not much to it, other than reproductions of the prints, but it’s a fun way to browse through them.

Cool. Lots of Kurosawa on TCM this month. My dad was a big Kurosawa fan. If he was still around, I bet he would have called me tonight to tell me that Seven Samurai was on. 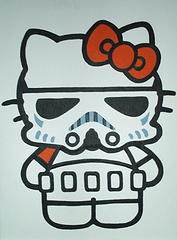 For some reason, I really love this graphic.
Hello Kitty + Stormtrooper = awesome.

I don’t know why I like this song so much, but I do. I may even pick up the CD/DVD!

Some nifty videos from the new Cornelius album can be found here. I really enjoyed Point, and this stuff sounds pretty good too. Point came out in the US on Matador, but I don’t see any indication that Sensuous will be coming out in the US any time soon. I do see it available as an import on Amazon.com, at a variety of price points, the cheapest being a little over $20, available in early January.