I flew out to Anaheim for WonderCon today. After a fairly lengthy trip out here, I’m now happily eating chips & hummus in my hotel room and winding down for the day. Adjusting to Pacific time is going to be a little hard, I think. I got up at 4:30am Eastern time today, and I’m feeling like I want to go to bed right now, but it’s only 6pm Pacific, so I think I need to at least try to stay awake until 8 or 9, if I can.

A bunch of little things went right today, so that helped. The Uber driver for my trip to the airport showed up on time. I got through security at the airport pretty quickly. (Though I got a rather intrusive “inside the waistband” screening today after something about my ass looked suspicious on the scanner.) The flight itself was pretty smooth. (Though it took off an hour late.) The hotel I’m in is pretty nice. And I got a nice falafel wrap for dinner from a place that’s right around the corner from hotel, and will probably be my go-to dinner spot for the rest of the con.

I think I learned some lessons about my limitations when I went to Redmond on business last year. That was the first time I’d been on a trip to the west coast in several years. This time, I took my Claritin with me, so I can hopefully avoid allergy problems. And I took some melatonin, in the hope that it’ll help me sleep. And I have some Breathe Right strips, and Flexall, and Advil. So I hope all that will get me through.

I took a walk to the convention center this afternoon, to make sure I knew where it was. It’s only a ten minute walk from my hotel. There were a few people milling around , since they were open for badge pickup today. (I got mine in the mail, so I’m all set on that already.) I’d never been to the Anaheim Convention Center before. It’s pretty big. Not San Diego big, but still pretty big. And I’m pretty sure the con uses the whole thing. So WonderCon is definitely a lot bigger than it was the last time I went, back when they were in San Francisco.

I’m looking at the panel list for tomorrow, and there’s a few really good ones. The one I’m most interested in is the Mark Evanier & Sergio Aragones panel. I’m also hoping to get to Scott Shaw’s Oddball Comics panel. These are both panels that have existed, in some form or another, for 20 years or more, at SDCC and/or WonderCon. (So, yeah, I’ve got a little nostalgia going on. I’ll try to find something current to get interested in too, to balance it out.)

So I guess that’s about enough incoherent rambling for today. I was mostly writing this to kill time, to be honest. I’ve managed to kill about an hour, so that’s something. Now I just need to read or watch TV for an hour or two, then I can go to bed. 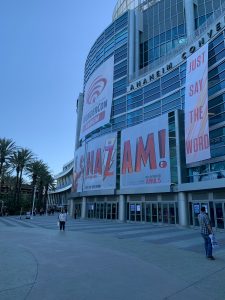