So, here it is, Labor Day. If you’d told me back in March that I’d still be working from home in September, and too afraid to take NJ Transit into NYC to visit a few museums on Labor Day, I’d… well, I’d be a little depressed but I probably wouldn’t be that surprised. I didn’t initially expect this thing to last so long, but there were good reasons to suspect that it would be around at least until the end of 2020, even back in March. I was ruminating in my last post about whether or not I could talk myself into going into NYC today; I’ve definitely given up on that idea. 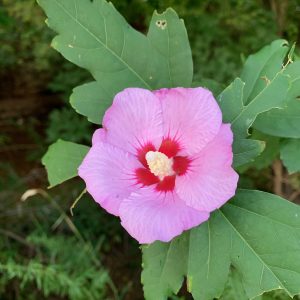 I’ve been going out for a morning walk nearly every day since the beginning of this thing in March. That habit has been one of the bright spots of the last several months. I’ve gotten into the habit of taking a few photos on my walks and picking one of them to save to Day One, along with a short journal entry, usually just a sentence of two. Day One tracks streaks, if you post to it every day, and my current streak is nearing 200 days. (Looking back, it appears that my current streak started on March 10, just before the pandemic lockdown.) I post about other stuff in Day One too, but I almost always start the day with a photo from my walk.

Often I just walk a circuit down Main St, up one of the side streets, then down High Street, back to Main St, and back to my front door. I can get a good 20-minute, 1-mile walk out of that. On weekends, though, I’ll often walk along the Peters Brook Greenway. I can get some nice photos along there. I took the hibiscus photo in this post yesterday morning, just about one minute before getting bitten by a mosquito. That mosquito bite bothered me a lot more than it should have. I’d gotten so used to getting into a nice relaxed state on these walks, and it’s been so long since I’ve been bitten by a mosquito, that I took it as something of a personal affront. And of course my mind started playing out all sorts of nightmare scenarios. (Can you get COVID-19 from a mosquito bite? Almost definitely not. Whew.) But I got back out there this morning and did a nice 40-minute walk along the Greenway again. This time, though, I tried to keep a little further away from the water.

I really didn’t do anything much useful yesterday, and I don’t plan on doing much today either. Yesterday, I read the “City of Bane” issues of Batman, which were the end of Tom King’s run on the title. My Goodreads review for the second half of that story nearly turned into a long essay on the Trump presidency, but I held myself back. Finishing that story got me thinking about King’s run on Batman, which started with the DC Rebirth event from the summer of 2016, which was of course just a few months before the 2016 election. That got me thinking about how much the world has changed over the last four years, and especially over the last six months. And how much it might change over the next, say, six months, or four years. I’d started reading monthly comics again in 2016 with the DC Rebirth event, and have keep reading them, though I’ve dropped Batman and Detective recently and I don’t have any titles on my current subscription list that were on it back in 2016. And I’m thinking of dropping monthly books entirely again. (But this is a subject I’ve blogged about too many times.)

Bandcamp has continued to do their Bandcamp Friday thing, where they waive their revenue share and give all the money from sales to the musicians. I last bought anything from them in June, so I was overdue to spend some money on music. I wound up spending around $75 this past Friday, buying seven albums (all digital), including something called Good Music to Avert the Collapse of American Democracy, a compilation benefiting the voting rights group Fair Fight. So I hope my $20 helps, though I’m not optimistic about the future of American democracy, to be honest.

One thought on “Labor Day”