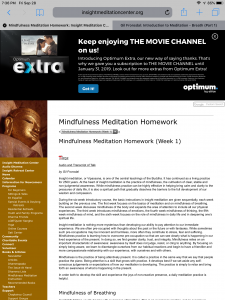 I’ve been getting increasingly annoyed with my cable TV and internet provider, Optimum. I vented a bit about them last year, and I guess it’s time to vent some more. In addition to all of the other things that bug me about them, they’ve just added a new one: ad injection. I was browsing on my iPad last night, and got a giant banner ad from Optimum, patting themselves on the back for giving me a free trial of The Movie Channel. This is on a page that would not normally have ads. Then, this morning, I got another banner ad from Optimum, on my desktop computer, again on a page that shouldn’t have had any ads.

I did some searching, and yep, I’m not the only one seeing this. Here a DSL Reports thread about it. (TL;DR: Apparently, HTTPS Everywhere might solve it.)

I’ve seen ads from them on my phone, while using their WiFi hotspots, and that’s annoying, but not unexpected. But doing this on my home internet service is pretty horrible behavior. I haven’t experimented much, but I guess the ad blocker that I use on iOS doesn’t catch this, nor does uBlock Origin or Privacy Badger on my desktop. I think that being on my VPN might help, since I haven’t seen this on my Mac, and I have that set up so that it’s (almost) always connected to the VPN. And I think I still have my router configured to use Optimum’s DNS servers. I should probably change that, even if that won’t help with this particular problem.

Earlier this week, I read a good post on Troy Hunt’s blog about Pi-Hole. I’ve thought about setting up a Pi-Hole box on my network before, but it always seemed like it would be overkill. Maybe not, though, if my ISP can’t be trusted to leave my web browsing alone. It’s bad enough that they email me and call me, trying to up-sell me on faster internet service and more expensive TV packages. Now, that’s not enough, and they need to shove ads into my browser too. Ugh. (I’m not sure if Pi-Hole would actually help with this issue either, but it seems like it might be a good idea.)

So I guess that’s my venting for today. Optimum is the only option I have for internet access. (Verizon Fios is an option in my area, but my building isn’t wired for it.) And internet access isn’t really something someone in my profession can do without. So I guess I’m stuck with them for now.