I went to a small comic book show in Flemington today. I haven’t been to a really small local con in a while. This one was pretty cool. They had a few artists as guests, including Darren Auck, who I chatted with for a bit, and bought a sketch from.

I bought a handful of recent DC Rebirth back issues from a guy who was selling them for cover price, buy 2 get 1 free. And a few other older random comics, including an obscure Matt Howarth comic that I don’t think I’ve ever seen before. I actually spent more (on comics) at this show than I did at NYCC (though I still didn’t spend very much).

And they gave out a goodie back at the door with quite a few random items in it, including some X-Men back issues and other random comics. Overall, it was a nice little show. Everyone was cool and friendly. There weren’t too many people there when I arrived, but I went early, so maybe it got busier in the afternoon.

Not a bad way to spend an hour or so on a Sunday. 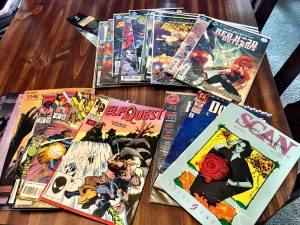