So I signed up for a New Yorker subscription, in a moment of weakness. And I even went for the combined print/digital subscription. I should probably just toss the issues in the garbage as soon as they show up, because I know I’m never going to get around to reading them!

I last had a subscription to The New Yorker in 2012/2013. I canceled it after one year, and I did eventually read (or at least skim) every issue, but it was probably 2015 when I finally tossed the last one.

I’m going through another one of those periods where I’m rethinking how I consume news. The news lately is really making my head spin. Between the January 6 hearings, the Supreme Court stuff, and the war in Ukraine, it’s starting to get to me. This week, I’ve been coping largely by binge-watching some old anime DVDs, of a very silly old series from the early 2000s. (I don’t even want to say which series, since it’s silly enough that I’m a little embarrassed to admit it.)

I still have New York Times and Washington Post (digital) subscriptions, and I still read a good number of articles from both. And I’m sure I’ll read a reasonable number of New Yorker articles. For now, though, maybe they’ll mostly be the humor articles, like this great one by Jonny Sun. 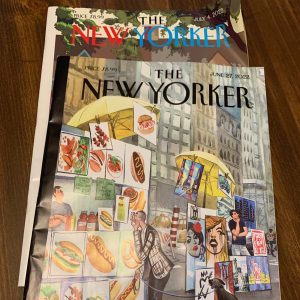 One thought on “A Moment of Weakness”