Back in November, I realized that I had two PTO days that I had to use by the end of the year, so I took today and next Friday off. I kind of thought I might use today to go see Star Wars: The Rise of Skywalker. But I got very sick over this past weekend, and have been struggling through the week. I’ve actually burned an extra day and a half, by taking Monday off and a half-day Wednesday. So I’m feeling a little better today, but not “go out to see a two and a half hour Star Wars movie” better. More like “sit on the couch and binge-watch the original trilogy” better.

Anyway, I’m well enough to kill some time writing a blog post. And I have a bunch of random thoughts I’d been meaning to organize, so I’m going to make this a bit of a catch-up/catch-all post.

First, some post Catalina upgrade thoughts: As I mentioned previously, I don’t have any major issues with the new Music app. I’m a little disappointed in the TV app though. While there is still a list view, there doesn’t seem to be any way to turn on the old column browser for it. So if I want to filter it down to show just, say, my Doctor Who season 10 episodes, there’s no quick way to do that. It’s also gotten the seasons and episodes of Doctor Who quite mixed up at this point. (That may have been the case previously, but I hadn’t noticed it.) See the screenshot below for an example of how a bunch of random stuff has all ended up under “season 1, episode 1.” Doctor Who is maybe an edge case, since I’ve purchased several different seasons and collections, and there are a bunch of odds and ends, like Christmas specials and stuff like that. But there should be a better way to organize it all.

I’m also a little disappointed in the new Finder interface for syncing my iPhone and iPad. It’s mostly fine, but they’ve lost the old status display that used to show at the top of the iTunes window. Now, you just get a tiny circle in the Finder sidebar, so you can’t really tell what it’s doing. It’s not a big deal, but it’s a pain, and there’s no reason they couldn’t fix that. I guess we’ve gotten to the point now where syncing an iDevice to a Mac is the exception rather than the rule. I assume most people either sync to iCloud directly, or don’t sync at all.

Next topic: VPNs. There’s been a bit more news about PIA since I last mentioned them in my blog. Here’s an interview with the COO of the combined KAPE/PIA company. And here’s a recent blog post from PIA. They’re saying a lot of the right things, and it’s cool that they’re open-sourcing their desktop client. On the more general privacy today, the NY Times is running a series on the smartphone tracking industry that looks interesting. There really wasn’t anything in the first part that I didn’t already know. The second part has a fairly simple guide to what you can do on your phone to limit tracking. Again, not much that I didn’t already know, but useful for a more general audience. I found it interesting that they recommended a specific VPN app, Privacy Pro SmartVPN. I wasn’t familiar with that particular app/service, but it’s worth looking into. The third part talks about national security implications, which is pretty important, though again, there was nothing in there that surprised me. The series is still ongoing, and it might be worth reading the rest of it.

Last topic (probably): music. I enjoyed reading The Catastrophist’s 2019 Tech Gift Guide in the NY Times this morning. I wouldn’t give any of these items as a gift, and the only item on the list that I own are the AirPods. And, even on those, I kind of agree with their observations about disposability and the darker side of Apple’s ecosystem. (Though maybe “Your nephew dies alone.” is a bit of a stretch.) And I’m still thinking about streaming music services, though I still can’t quite talk myself into signing up for one. On a practical level, I think either Spotify or Apple Music would make the most sense for me. Spotify is the most popular and has a lot of interesting public playlists available. Apple Music is less popular, but would work better in terms of syncing my existing library to the cloud. And it has a 100,000 track limit, vs Spotify’s 10,000 track limit. (This article is a couple of years old, but as far as I can tell, that’s still the case.) And even if the track limit was higher, there doesn’t seem to be a way to get my iTunes library into Spotify without third-party software. So, I’d probably opt for Apple Music if someone held a gun to my head and told me I had to sign up for a streaming music service today. Of course, nobody’s holding a gun to my head. But every time I look at an artist’s web page and see links to their music on Spotify and Apple Music but no obvious link to buy it in MP3 format, I get nudged a little closer to signing up.

I still have a few thoughts rolling around in my head, but it’s time to give up on this blog post and go do something else. Maybe start into that Star Wars binge I mentioned at the top. 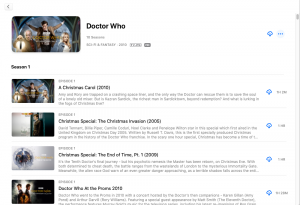