As reported by Mark Evanier, and many others, Len Wein has passed away. I wasn’t going to write a post about this, since I didn’t think I had much to add, but then Kurt Busiek posted a few pages from various Len Wein stories to Facebook, including the one below. It’s from “Never Say Die!”, a 12 page story from Adventure Comics 466. I bought that issue off the newsstand when it came out, in 1979. At that time, DC was publishing Adventure as one of their Dollar Comics. Basically, it was a 64-page anthology title, with stories featuring Flash, Aquaman, Deadman, and the JSA.

I remember enjoying all of the stories in that issue, but the Deadman story really stuck with me. In it, Deadman sees an old man preparing to commit suicide, and intervenes. (There’s a good synopsis of the plot on the wiki page I linked above.) It’s the kind of story that (at the time) probably couldn’t have been published outside of an anthology title. It was a little too weird and a little too dark. (The story can be found in Deadman Book 4, by the way, which includes his other Deadman stories from Adventure Comics.)

I’d forgotten that it was written by Wein, but I never forgot that story. I don’t remember any details about the other stories in that issue, or really in very many other comics that I bought around that time. This was probably one of the first comic book stories I read that broke the mold of the typical Marvel/DC 70s superhero story, which was the only thing I’d been exposed to, up to that point. (In a few years, of course, I’d be reading Cerebus and Love & Rockets, and I’d have a much more expansive view of the kind of stories that could be told in comics. But I digress.)

I’ve never really thought about Len Wein as being one of my favorite writers, but when I look at some of the comics I was reading and enjoying as a kid, some of the best of them were written by him, including this one. His Batman writing was also really good, including the Untold Legend of the Batman mini-series with John Byrne, and other stories that can be found in his Tales of the Batman volume. 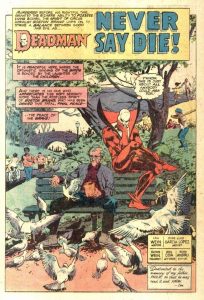