I’ve been messing around with F# lately. It works fine in VS 2013 Express on my Windows 8 laptop, but I wanted to be able to play around with it on my Mac too. I have Xamarin Studio installed on the Mac, and I added the F# support to it, and that works OK. I wanted to be able to use FSI from the terminal too, though. That turns out to be pretty easy too, though it’s called “fsharpi” instead of “fsi” like it is on the PC. 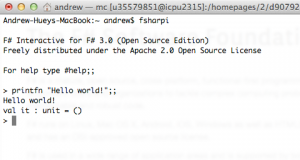