I don’t think I’ve ever linked to an XKCD comic on this blog before, but (of course) I read it regularly. This one made me chuckle, thinking about a project I’m currently working on. I have a task that involves generating output files and sending them to a few other companies via SFTP, weekly. For “phase one,” I was going to manually run my program to generate the files, then send them out with WinSCP. Then, once that was running smoothly, I was going to add SFTP capability to the program, using SSH.NET.
This is kind of a long story, but to make it short, let’s just say that I’ve spent more time than is really reasonable taking care of the SFTP automation, and have yet to put it into production. Meanwhile, I just keep sending out the files every week, manually.
I’ve actually learned a lot about a couple of things in the process of working on this automation, but the amount of effort that’s gone into the automation, vs. the five minutes it takes to send the files off manually once a week is a bit silly. 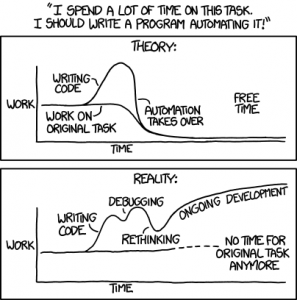