OK, I know I already wrote one pointless blog post today, and one per day should really be my quota, but, well, that one was spur of the moment, and I have some other stuff I’d been meaning to blog about today.

Now that the Thanksgiving weekend is winding down, I’ve been thinking about holiday stuff and end of year stuff. I don’t really have an important point to make or anything, rather just some random items to note.

I didn’t do much in the way of Black Friday shopping this year. I certainly didn’t do any in-person shopping, of course. I did take advantage of a few Black Friday deals though:

I’ve been overwhelmed with e-mail and snail mail related to charities this year, and of course it gets even more intense around the holidays. I generally like to put together a list of charities to give to at the end of the year, and make some donations. I probably won’t be doing that on Giving Tuesday, but I’ll get around to it at some point before New Year’s Day. I probably gave more to political causes earlier in the year (for obvious reasons). Now, at the end, I should look at more traditional charities, like food banks and stuff like that. NJ.com has a good article listing some worthy NJ charities to support right now.

I’ve been going back and forth on the idea of discontinuing my cable TV service for quite a while. My latest cable bill included a notice saying that my promotional discount would be reduced next month, so my cable bill will go up by about $20/month. That’s just about enough to get me over the fence on that. Of course, their customer service department is closed on Sunday, so I’ll have to call them at some point during the week. If I call, and they offer to keep my current discount, I’ll probably stick with cable. But if they don’t, I’ll probably go ahead and discontinue it. I think I’ve just about made my peace with the idea of no longer having access to live TV.

I often send out my Christmas cards over the Thanksgiving weekend. Or at least I start working on them. I don’t send out a lot, but I always send out more than I get back. And I seem to get fewer and fewer every year. It’s really tempting to just give up on it this year. I really haven’t been in anything like a Christmas mood, and I think it’s going to be hard to get too enthusiastic about it this year, for a variety of reasons.

But, on a lark, I picked up my dumb little fake Christmas tree from my storage unit today and set it up. So I’m hoping that maybe that’ll start getting me in the right mood. Maybe I can bring myself to do the cards next weekend. I don’t know. Maybe I can talk myself into watching It’s A Wonderful Life at some point soon. Or if not that, maybe Die Hard. Small steps… (Speaking of Christmas movies, Letterboxd’s list of 25 top rated Christmas movies has some good ones.) 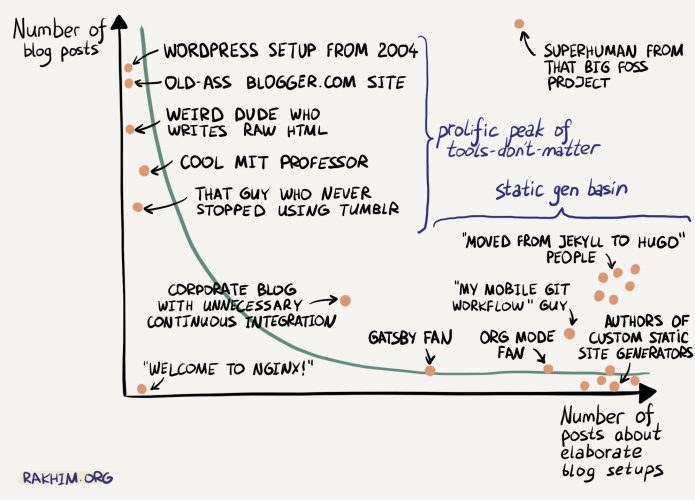 I saw this comic on Twitter this morning, and immediately started thinking about where I fit on it. The comic is from rakhim.org, and I hope he doesn’t mind me END_OF_DOCUMENT_TOKEN_TO_BE_REPLACED

It looks like we’re right in the middle of our second wave here in NJ. There are a few bright spots, but I think, overall, it’ll get worse before it END_OF_DOCUMENT_TOKEN_TO_BE_REPLACED

Since I recently finished listening to Invisible Man, I thought I’d look into starting a new audiobook. I blogged about my issues with Invisible Man here. In a nutshell: it’s END_OF_DOCUMENT_TOKEN_TO_BE_REPLACED

I mentioned in my last post that I was thinking about signing up for Disney+. Well, I did that, and have now watched most of the first season of The END_OF_DOCUMENT_TOKEN_TO_BE_REPLACED

I still seem to be dealing with a lingering cold that I picked up last weekend. So this weekend has been pretty quiet. I finished reading The Outsiders, finished watching END_OF_DOCUMENT_TOKEN_TO_BE_REPLACED

We’re definitely seeing a big second wave of coronavirus cases here in NJ. I’m glad I’m still able to work from home, and I guess I’ll be doing that through END_OF_DOCUMENT_TOKEN_TO_BE_REPLACED

This is a follow-up to yesterday’s post about losing all of my long-term reminders. Since I wrote that post, I found out that I can use Microsoft To Do at END_OF_DOCUMENT_TOKEN_TO_BE_REPLACED

At work, I need to keep track of a number of tasks that need to be done infrequently, such as replacing app secrets or renewing SSL certificates. Depending on the END_OF_DOCUMENT_TOKEN_TO_BE_REPLACED

So in yesterday’s post, where I was talking about all the stuff I did on Saturday, I said “I’m hoping that doesn’t result in me getting another cold, or even END_OF_DOCUMENT_TOKEN_TO_BE_REPLACED