When my Dad passed away, he still had a roll of film in his old 35mm camera. I wanted to finish off the roll, get it developed, and see what his last few photos were, but I kept putting it off. Since I’m having an estate sale this weekend, I decided it was time to finally finish the roll and send it off, so I could include the camera in the estate sale. I sent the roll off to Snapfish for processing. (It’s been many years since I’ve had a roll of film developed. Snapfish has a mail-in service that’s pretty cheap, so I decided to try them.)

I just got an e-mail back from them with a link to the photos. (I guess I’ll get the negatives and prints back in the mail soon.) Sadly, his last few photos weren’t that interesting. It looks like he’d just taken a couple of snapshots from the front porch after a snowfall, probably in early 09. (The timestamp on the photos says Feb 06, but they can’t be that old. I don’t think he had the date set correctly on the camera.) I was hoping I’d have a couple of final photos of Mom and Dad on that roll, but alas, no.

All the photos came out looking a lot more purple than they should. I’m guessing that’s because the film was so old? Or maybe just a bad job of processing? 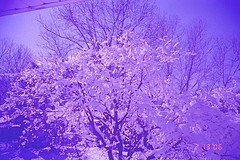 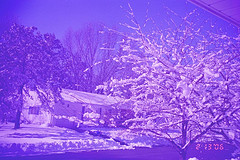